Frida, the heroine, quits college and returns home to Port Gamble where her father owns a restaurant.

Tom and Lance are a gay couple who are visiting Tom’s mother to finally tell her Tom is Gay.

The tiny town of Port Gamble has a sudden zombie outbreak. Frida is thought to be a terrorist by her neighbors although she was born locally, because her father is from the Middle East. Her neighbors torture her.

Tom and Lance hide out in a church where the mayor and reverend are preaching against gays. The church members attempt to make them “not gay” by strapping them to an anti-gay device which shows a black and white  film of a naked guy which seems to have been filmed in the 1950’s, and injecting them with a medication that will make them sick with they see “gay images”. 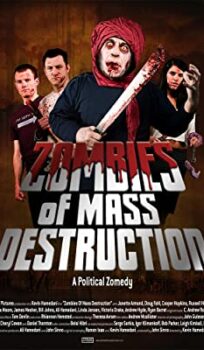