SHORT VERSION
Zorba’s timber transport device collapses, ruining any chance of restarting the lignite mine.  Basil decides to return to England, but asks Zorba to teach him the Sirtaki before leaving.

LONG VERSION
Basil (Alan Bates) is a shy half-English, half-Greek writer who is traveling from England to the isle of Crete.  While waiting at a port in Greece, he encounters Alexis Zorba (Anthony Quinn), a gruff but entertaining peasant who convinces Basil to take with along.  Basil tells Zorba that his father left him some land there and hopes to restart an idle lignite mine on the property.  Zorba says he was once a miner and can help.  Upon their arrival in Crete, they travel to the local village near the property and stay at a hotel run by a French war widow named Madame Hortense (Lila Kedrova), who strikes up an immediate relationship with Zorba.  Zorba also begins to do an unusual dance called the Sirtaki, which he does periodically throughout the movie.

Over the next few days, Basil and Zorba attempt to restart the lignite mine, but are unsuccessful because the timbers supporting the mine are crumbling, making it unsafe.  Zorba wants to use the trees from the nearby forest to shore up the mine, but the forest is on property that belongs to the nearby monastery.  He goes to the monks and befriends them by getting them drunk and they agree to give up the trees.  At this time, Basil and Zorba are introduced to “The Widow” (Irene Papas), a young woman who is constantly teased by the townsfolk for not remarrying, especially to a young man who is clearly in love with her, but is always rebuffed.  She is interested in Basil, but the shy writer won’t pursue her.

Back at the mine, Zorba has concocted a plan to transport the timber down the mountain the forest is sitting on by cable, and Basil gives him all of his money to go to the city of Chania to buy the cable and any other supplies that are necessary.  Instead, Zorba goes to a local cabaret and blows the money on a local dancer there.  A drunken Zorba writes Basil and tells him that he has found true love and may not return.  The letter arrives at the same time a visiting Madame comes by as asks about it’s contents.  Basil, furious at Zorba for his apparent irresponsibility, lies to the Madame and tells her that Zorba admitted he is in love with her and wants to marry her upon his return.  Later that night, a drunken Basil finally gets up the nerve to go to the widow’s house, and they make love.

The next morning, the townsfolk see the widow has slept with the writer and mercilessly tease the young man who is in love with her.  Heartbroken, he goes to the sea and drowns himself.  That same day Zorba returns to the village with the cable and supplies and learns of what Basil told the Madame, who is beginning to fall ill.  Zorba barely remembers writing the letter and doesn’t like what Basil did but will play along.  The next day, the father of the young man is holding the funeral, but refuses to allow the widow to enter the church.  The townsfolk all surround her and blame her for his death and want to stone her.  Zorba stops them from stoning her, but the father cuts her throat, killing her instantly.  Basil claims that he was unable to interfere, but he was actually too meek to do anything.

Some time later, while the cable transport is being built, the Madame’s health has taken a turn for the worse.  Zorba, who has already pretended to marry her, is by her bedside.  The townsfolk have learned of her condition and are prepared to loot her hotel upon her death.  Zorba and the Madame have a tearful good-bye, and upon her death the townspeople begin to ransack the hotel.  As they walk away, Zorba tells Basil that since she was a foreigner, there won’t be a funeral and she will be buried in a simple grave.

Finally, with the transport finished, Basil and Zorba are ready to begin sending the timber down the mountain so they can shore up the mine and restart it.  Once that happens, it will allow the townspeople to go back to work and revive the town’s economy, and will make them rich.  However, Zorba’s transport never took into account how to control the speed, and the fast-moving logs cause the entire contraption to collapse after only three logs are send down.  Zorba, realizing that this failure will cause Basil to quit and return to England, tells Basil he is sad that he is leaving Crete, and he will have to return to Greece as well.  Basil responds by asking Zorba to teach him the Sirtaki, which they do on the beach as the movie ends. 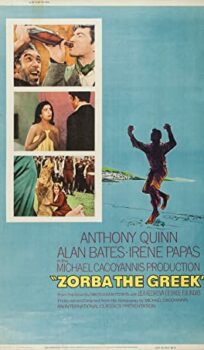