Short Version:
David #1 kills Jill #1 with a kitchen knife in one of the bedrooms because she dumped him after he messed up apologizing to her and won’t take him back. When the doubles appear for the last time, David goes to Jill #2 (who accepted his apology because he knew what she was going to say when she went through the same break-up argument Jill #1 had had earlier with David #1) and David leaves the party with Jill #2 as if nothing happened. We also see 2 comet things streak across the sky above them.

The rest of the party-goers can’t tell if they’re themselves or their doubles because the doubles didn’t appear again after the brawl in the pool house. Teddy tries to get Melanie to call him but she just gives him a dirty look. Allison, having made out with her double a little/had a weird conversation where they had “fun” together, just goes home as if nothing happened. The host of the party seems traumatized but everything seems to be over.

Longer Version:
In the first part of the film, David calls Jill at her fencing match. They have a flirty discussion where they talk about missing each other and then, as it turns out, he’s there and he gives her flowers. She’s happy to see him and he notes that she’s changed her hair. Apparently, she’s gone off to college away from their home and he’s stayed behind because he likes things the same.

Jill gets back to her match and David, at the end of it, thinks he sees her at the water fountain, approaches and it turns out it’s another girl. For some reason, David kisses this other girl and then sees Jill over her shoulder. Jill gets upset, runs off, and dumps him.

Next, we see David at his house prepping for a party with Teddy. Teddy’s the stereotypical “must get laid at the party” character and he tells David it’s great that they’ve broken up so David can find someone to sleep with at the party too. David is upset and keeps trying to get Jill to call him so they can talk, etc.

They go to the party and find everybody there. Their host is very pleased at his decoration skills. Outside as they enter they meet Allison, a shyer type friend of theirs. David just wants to find Jill who, he’s informed, has come with another guy. The host’s drug dealer and his girlfriend are outside wanting to come into the party but weren’t invited; the dealer is a scary guy but doesn’t force his way in, instead he and the girlfriend sit on the hood of his car outside.

Inside, it’s a wild party. Intercut with this opening/get to the party stuff we see a comet or asteroid crash and blow up a utility pole.

The three characters we’ve met have these events intercut between them:

David tries to find Jill and when he does they have an argument where Jill says something to the effect of he’s standing still/not growing and she’s changing/growing and if he just wants to force her to be the same/have things stay the same, she doesn’t want to be with him. He says all the wrong things and she dumps him. Then she goes back to the guy she came with. David, when the doubles appear, sees the drug dealer outside have a fight and shoot his double in the head, leaving him dead on the lawn.

Allison is awkward at the party. A more popular guy approaches her, as a joke at the behest of his mean girlfriend, to hit on her, and then the guy and his girlfriend laugh at her. She goes into a back bedroom and chats with a bird in the dark and feels upset/bad about what happened.

Teddy gets the attention of Melanie. They have a flirty talk on the couch downstairs and then she goes upstairs to have sex with him. He follows her after a while, finds her naked in the room, and they have sex. Melanie slaps him comically and they fall off the bed and finish. Melanie goes to take a shower and the lights flicker… and then Melanie (#2) from when before he got to the bedroom reappears, naked in the bed next to him while Melanie (#1) is showering… she comes out and everybody is confused.

Teddy leaves the two Melanie’s together and goes out onto the landing. The original partiers have left the house due to a small fire caused by people playing with a tennis ball soaked in alcohol and set on fire set off the sprinkler system and the doubles are repeating what happened sometime before. David, Allison, and Teddy briefly discuss what’s happening and things that happen to them repeat, and then David sets out to find Jill to talk to her as the repetition set back to before Jill broke up with him. Allison #1 saves Allison #2 from being duped by the guy and his girlfriend by dumping a drink on the girlfriend and then Allison #1 and Allison #2 proceed to hang out together the rest of the night and Teddy goes to investigate what’s happening.

David finds David #2, smashes him in the head and leaves him in a room tied up and then goes to find Jill #2 and, knowing what she’s going to say since it’s a repeat of what happened before, he succeeds in preventing her from dumping him.

The lights go out and the doubles disappear. The party moves down the hill to a stage where two strippers dance for the rowdy crowd. There’s another electric surge and the doubles appear again, closer in time than their previous appearance and since they’ll be coming down the hill, Teddy jumps up on the stage and tries to convince the others to hide because their doubles are coming and the doubles are getting closer in time to the originals and they don’t know what will happen when they “catch up.” Nobody takes him seriously at first. A few other partiers have seen weird things so the host convinces them to go to the pool house. A couple of the partiers are convinced they have to kill their doubles, so they go out and beat them up/kill them. Two successfully kill their doubles and one hits his over the head with a shovel but doesn’t kill him when the electric surge happens again and they disappear.

In the meantime, David runs into Jill #1 again, thinking she’s Jill #2, and tries to hug her – she gets mad at him and rejects him again.

The next time the doubles appear, it’s mere seconds apart from the previous events — meaning they reappear with the partiers in the pool house.

An all-out brawl ensues with Teddy and the others at the party beating the crap out of their doubles, fighting and killing each other. At the same time, Allison and her double are talking about how much they enjoy “each other’s” company, and toward the end of everything they kiss.

David seeks out Jill #1 in when the doubles appear again and stab her with a kitchen knife, killing her in one of the bedrooms. When the doubles appear for the last time, David goes to Jill #2 (who accepted his apology because he knew what she was going to say when she went through the same breakup argument Jill #1 had had earlier with David #1) and David leaves the party with Jill #2 as if nothing happened. (It’s never explained why Jill #2 doesn’t disappear when the lights surge and go out again.) We also see 2 comet things streak across the sky above them.

The rest of the party-goers can’t tell if they’re themselves or their doubles because the doubles didn’t appear again after the brawl in the pool house although there are blood and other evidence of the fight still in the room. Teddy tries to get Melanie to call him but she just gives him a dirty look. Allison, having made out with her double a little/had a weird conversation where they had “fun” together, just goes home as if nothing happened.

The host of the party seems traumatized but everything seems to be over and everyone leaves. 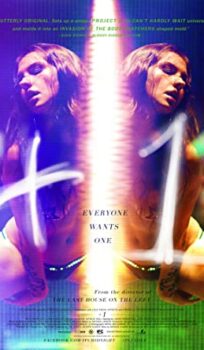