Over time, as J.C.’s (Diane Keaton) responsibilities in raising Elizabeth (Kristina & Michelle Kennedy) increase, her output at the management consulting firm decreases, and this culminates in her boss, Fritz (Sam Wanamaker), removing her as the team leader for the prestigious Food Chain account and assigning her to a lower-profile client. This decision also causes her impending promotion to get postponed until next year. Bitter and humiliated by all of this, J.C. quits the firm, and she buys and moves into a 62-acre estate in Hadleyville, Vermont, with Elizabeth that she had her eye on earlier in the film, thinking that some time in the country will be good for her.

During the winter, J.C. uses the apples from her estate’s orchard to invent a recipe for gourmet baby food that she calls “baby applesauce”, but over the course of that same winter, she gets hit with one expensive home repair after another that drains both her finances and her patience, plus she finds herself increasingly overcome with loneliness. One day, after the town’s handyman, Mr. Boone (Britt Leach) informs her that her well is dry and she will need to tap into the county’s water line, which will be another big expense, she suffers a nervous breakdown and faints. She later wakes up to find herself in the office of Jeff (Sam Shepard), the town’s veterinarian, who explains that Mr. Boone brought her here after she collapsed, and Elizabeth is currently in the care of his nurse. J.C. tells him all about her problems before ultimately saying that she is going to sell her estate and move back to New York City. However, she finds out from the realtor that her chances of selling it are slim, as she was the only one who showed any interest in it during the five years it was on the market.

One day, while dropping off a bunch of jars of her baby applesauce at the local convenience store, she spots some cans of kerosene on a shelf and starts to seriously consider using them to burn down her house. Thankfully, that all changes when a group of yuppie tourists enters the store to do some shopping and take notice of her baby food. Liking the way that it is packaged as well as how it is gourmet baby food, which nobody has thought of before, they tell J.C. that they want to buy a lot of them. One of them also looks at Elizabeth, who is with J.C., and affectionately calls her a “country baby”. Sensing a real business opportunity, J.C. starts to do the necessary research on how to best market her baby food, and she also starts traveling to different places outside Hadleyville to find stores willing to sell it as well as setting up outdoor stands to demonstrate how good the baby food is to prospective customers. In time, her baby food – which gets rechristened as “Country Baby” – transforms into a full-fledged, expanding business, with orders pouring in from all over the country. J.C. also finds herself steadily forming a romance with Jeff during this period, and one night, they sleep together back at her estate.

The next morning, J.C. receives a surprise call from Fritz, who tells her that Food Chain is interested in buying Country Baby, and this deal may enable her to return to her old life in New York City. She thus heads back to her old firm that very afternoon for a meeting with Fritz and the C.E.O. of Food Chain, Larrabee (Pat Hingle), to discuss the deal. Larrabee tells her that he wants to see Country Baby on every supermarket shelf in America, and he puts forth a contract stating that his company will buy it for $3 million. He also adds that its headquarters will have to be moved to Cleveland so his people can oversee production and take some of the day-to-day responsibilities off her shoulders, but she will be retained as the company’s C.O.O. and will earn a base salary of $350,000 a year, with the possibility of earning $1 million a year if Country Baby performs well, in addition to some perks and bonuses. J.C. tells him that she needs to take a few minutes to think all of this over and heads off to the bathroom, and when she gets in there, she expresses excitement over how this deal will put her back in the saddle in the corporate world. However, as she makes her way back to the meeting, she starts to think about Elizabeth and Jeff, and her excitement vanishes. She thus re-enters the conference room and tells everyone that she is declining the offer, explaining that, though she was initially excited about this deal, she realizes that she doesn’t want to sacrifice motherhood, Jeff, or her home in Vermont for it, and she believes that no one should have to make such sacrifices in order to be successful. She also remarks that she feels she is doing pretty good on her own, and if Food Chain can put Country Baby on every supermarket shelf in America, so can she.

J.C. returns to Hadleyville and visits Jeff at his veterinary practice, and she tells him that she is staying in town before sharing a passionate kiss with him. She returns to her estate and ends the film playing with Elizabeth, who calls her “mama.” 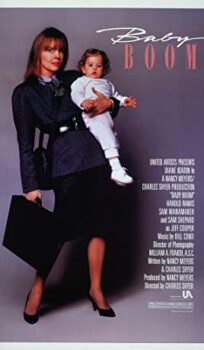