Krypto the super dog is Superman’s best friend, but he has trouble getting along with animals and letting go of Superman when he is dating Lois Lane. Meanwhile, a guinea pig named Lulu that was experimented on by Lex Luthor obtains orange kryptonite that gives her superpowers, along with other shelter animals Ace the dog, PB the pig, Merton the turtle, and Chip the squirrel. Lulu imprisons the Justice League with the help of her own guinea pig army that she grants superpowers, and she tries to free Lex from prison.

Krypto teams up with the other pets to save the League, and he helps them work together to keep their new powers under control. After Lulu frees Lex, he betrays her and goes off with his assistant Mercy Graves. Lulu becomes enraged and decides to kill Lex and the League by launching them in a rocket that will explode upon leaving Earth’s atmosphere. The Super Pets work together to free the League and fight Lulu, but she absorbs the kryptonite to turn herself into a gigantic monster. Krypto uses a special move to defeat and depower her and Ace saves him.

Krypto accepts Superman and Lois getting engaged, and the League adopts the rest of the pets, plus two of Lulu’s reformed guinea pigs. The Super Pets become their own heroic team, but Mercy later finds Lulu so they can work together on their own evil schemes. 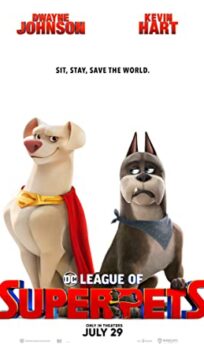