Doctor Strange in the Multiverse of Madness(2022)

Wanda Maximoff/Scarlet Witch (Elizabeth Olsen) has become corrupted due to her use of the Darkhold, a powerful book containing spells for dark magic. Hoping to be reunited with her sons Billy and Tommy, she attempts to kidnap teenager America Chavez, who possesses the ability to jump between any world in the multiverse. America teams up with Doctor Strange (Benedict Cumberbatch) and Wong to stop Wanda, but after she destroys the Kamar-Taj and kills several sorcerers, she keeps Wong captive while Strange and America end up in another universe.

Strange and America are captured by the Earth-838 version of Baron Karl Mordo, who is part of The Illuminati, made up of heroes from other universes – Captain Carter, Black Bolt, Captain Marvel (Maria Rambeau instead of Carol Danvers), Reed Richards/Mr. Fantastic, and Professor Charles Xavier. They consider Strange to be the greater threat to the multiverse because the Strange of that universe was corrupted from using the Darkhold to defeat Thanos, leading to them having to kill him. Wanda uses the Darkhold to dreamwalk, or enter the mind of her 838 variant to be with her sons, but she slaughters the Illuminati (minus Mordo) and goes after Strange, America, and the 838 variant of Christine Palmer, Strange’s ex-girlfriend. Strange attempts to get the Book of Vishanti, which can be used against the Darkhold’s magic, but Wanda destroys it and captures America, sending Strange and Christine into another dimension.

After Strange fights an evil variant of his, he realizes he has to use the Darkhold to stop Wanda. He dreamwalks into the corpse of a dead variant of his, making his way to a temple where Wanda has taken America. Together, they fight Wanda, and America manages to hone her power and place Wanda in her variant’s home, where Billy and Tommy see her Scarlet Witch form as monstrous. Wanda realizes how far she has gone and resolves to destroy every copy of the Darkhold, seemingly sacrificing herself and bringing the temple down.

Strange parts with 838-Christine and helps Wong rebuild the Kamar-Taj with other sorcerers, with America training under them. Strange then appears to be affected by the use of the Darkhold, as he grows a third eye like his Sinister Strange variant did. He is found by a sorceress named Clea, who tells him he created an incursion by using the Darkhold, and she invites him to join her in the Dark Dimension. 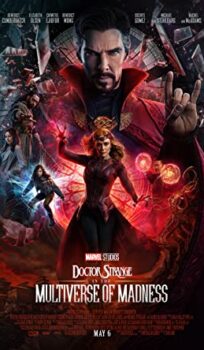