Joe Valencia (Jo Koy) is a comedian and actor trying to be there for his son Junior (Brandon Wardell). Just as he might land a potentially big TV break, he is set to visit his Filipino family for Easter Sunday. He brings Junior with him to meet the family, which includes Joe’s bumbling cousin Eugene and his mom Susan, who is feuding with her sister Theresa.

Eugene owes money to a gangster named Dev Deluxe after he made some idiotic business decisions. They attempt to pawn off the stolen boxing gloves of Manny Pacquiao for money to repay Dev. Meanwhile, Junior befriends a girl named Tala and has a crush on her.

During Easter Sunday, Joe barely manages to keep the family together and resolves the conflict between his mom and aunt. However, Dev shows up to ruin things and he takes Junior hostage for the money. Joe puts on Pacquiao’s gloves and knocks Dev out, leaving him and his thugs to get arrested. Joe later finds out from a TV producer that they want to make a sitcom based on his family, which Joe accepts. 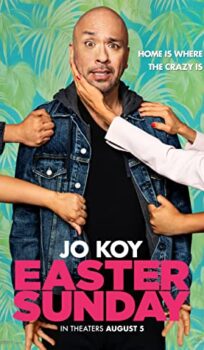