Becky and Hunter (Grace Caroline Currey and Virginia Gardner) are best friends and adrenaline junkies, but Becky suffers a great loss when her husband Dan falls to his death while mountain climbing. After nearly a year, Becky is a depressed alcoholic, and she distances herself from her father, James (Jeffrey Dean Morgan), because he suggested that Dan wasn’t as good of a guy as Becky made him out to be. Hunter later invites her to climb a 2000-foot-high TV tower, despite Becky’s hesitance after Dan’s death. However, she changes her mind and decides not to live in fear.

The girls make it to the top of the tower, but the ladder to climb down breaks off, leaving them stranded at the top. Becky and Hunter must combat dehydration and starvation while trying to reach out for help, but their car is stolen by rednecks, and Hunter’s phone breaks when they try to send a message for help. Hunter climbs down and reaches their bag that landed on a satellite. She manages to get the bag, and Becky tries to use their drone to send a message to their motel for help, but the drone is destroyed by a truck.

As Becky grows more delirious from lack of food and water, she realizes that Hunter died after she fell from the harness and hit the satellite below, where she bled out, and Becky only managed to pull the bag up. After killing a vulture and eating it for sustenance, Becky makes one last attempt at survival by climbing down toward Hunter’s body and sending a message to James for help by stuffing her phone in Hunter’s other shoe and placing it inside Hunter’s stomach, where a vulture was picking at it. This works, and James shows up with dozens of authorities and medics, and Becky is rescued and reconciles with James. 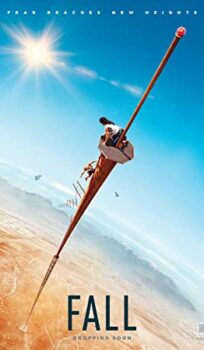