Abby Snow (Jordan Hinson) and her little brother Ethan (Bobby Coleman) are adopted by a couple of seemingly nice people who live in a nice house in Southern California.

As the mom, Eve Goode (Angie Harmon), begins to act more and more strangely, Abby discovers that this couple has adopted children before, and those kids have died mysteriously. It seems mom suffers from a form of Münchausen syndrome by proxy, slowly poisoning or causing harm to the children so she can take care of them more, until they eventually die.

As mom begins to do this to Ethan, it’s up to Abby to find a way to escape, but the house is always locked by a bolt, and they cannot use the phone to make outgoing calls. Plus, the policeman (Jason London) that visits the kids frequently, has no clue with what is going on and thinks the mom and dad are super people.

Eventually, the policeman catches on that something is amiss and secretly enters the house. Unfortunately, he clears each room as if he’s a first year cadet, and Eve is able to sneak up behind him and knock him out.

In the end, psychomom is about to kill the children, but adoptive dad (Joel Gretsch) shoots and kills his psycho wife.

It should be noted that the house is not made of glass (like in the first film) and no one has the last name of Glass (as in the first film).
The ‘glass’ in this case is a metaphor of the children’s fragile predicament. 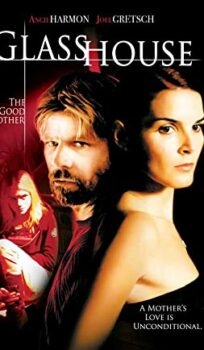