Ex-reporter Hildy (Rosalind Russell) is all set to marry her fiance Bruce (Ralph Bellamy) when her sneaky ex husband Walter Burns (Cary Grant) entices her to research one more story for him. After a madcap night of chasing the news, Hildy realizes that she belongs with Walter and the newspaper business. When Walter tells her to go marry Bruce, she reluctantly goes off, but as she’s walking out the door she finds out that Walter has had Bruce jailed yet again on bogus misdemeanor charges. Hildy finally breaks down and cries, and says she thought Walter was really going to let her marry Bruce and that he “didn’t love her anymore.”

Walter and Hildy finally plan to remarry, and have their honeymoon in Niagara falls. 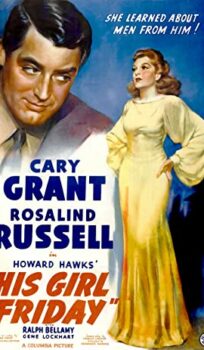