SHORT VERSION:
Play shuts down his house party after someone breaks the toilet, but he wins over Sharane enough to make a date with her in the near future. Kid ends up winning Sidney’s affections, but when he returns to his house in the morning and tries to sneak into bed, his father appears and whacks him repeatedly with his belt for his disobedience.

LONG VERSION:
Kid (Christopher “Kid” Reid) ends up escorting both Sharane (A.J. Johnson) and Sidney (Tisha Campbell) back home from Play’s (Christopher “Play” Martin) house party, but when they get to Sharane’s house first, she and Kid make tentative plans to do something on Friday, and when he moves in for a kiss, she rebuffs his advances and heads inside. Sidney goes in to talk to her for a minute, since Kid has been vying for both of their attentions all night, and she asks the blithe Sharane why she is playing both Kid and Play since she just promised Kid that they would do something on Friday and she had earlier promised Play that very same thing, and she shouldn’t be doing that to them because those two are friends. Sharane accuses her of just being mad because she didn’t get the attention of any guy tonight, and Sidney retorts that that was likely not by accident. Sharane soon tells her that Kid still has to walk her home, so if she wants to try and take him, she can.

As Kid walks Sidney home, they start out arguing, but they soon have a very pleasant chat that lasts the rest of the way, and when they reach her house, each lets the other know that they are cool with them. She winds up inviting him up to her bedroom, but she halts things before they get too hot and heavy and points out to Kid that he was trying to put the moves on Sharane earlier and wants to know if she is just his second choice. Kid says that he is attracted to both her and Sharane, but if he had to choose between them, she is the one he wants, because he wants to be her friend as well as her lover. They resume with getting intimate, but it gets quashed seconds later when Kid finds out that Sidney isn’t on the pill nor has a diaphragm, and he finds that the condom he has in his wallet has long since expired. He is then forced to flee when Sidney’s parents return home. Meanwhile, Play pulls the plug on his party after he discovers that someone broke the toilet.

While Kid is walking back to his house, Stab (Paul Anthony), Pee Wee (Bowlegged Lou), and Zilla (B-Fine) – fresh from a beating from the white cops Boyd (Barry Diamond) and Warnarski (Michael Pniewski), whom they crossed paths with twice during their quest to administer a beatdown to Kid – spot him and chase after him. He tries to hide himself in a broken refrigerator in an alley, but the trio figure out that he is in it and keep him trapped in there. However, before they can do anything, Boyd and Warnarski appear again, and they arrest them as well as Kid and put them in a holding cell. Kid calls Play and lets him know of his situation and asks him to bail him out. Play and Bilal (Martin Lawrence) check their funds and find themselves short, and after thinking about where they will get the rest of the cash, Play remembers how Kid left with Sharane and Sidney, so they visit Sharane and tell her that Kid is in jail and they need bail money. She agrees to help, but only if Play will take her to Burger King afterwards for a bite to eat. Before she leaves with them, she telephones Sidney and explains what happened to Kid, and Sidney tells her that she wants to come along as well. When Play, Bilal, and Sharane stop by Sidney’s house and pick her up, she whispers to Sharane that she won Kid’s affections and even got him in her bedroom.

As the inmates are drawing straws to determine who gets to have their way with Kid first, Kid asks an older inmate what he can do to get out of this, and the inmate replies that Richard Pryor once said that he made inmates laugh to take their minds off of wanting to diddle him. Kid decides to put this advice to use, but he switches out telling jokes with doing a rap number, and this staves off the crooks long enough for Play and company to show up and post his bail. After they visit Burger King, Sharane is driven back home first and Play escorts her to her door, and they agree to meet up again soon. They then drop Sidney off, and she and Kid kiss passionately before she goes inside. Play and Bilal then get Kid back to his house, but as he tries to sneak into bed, his father (Robin Harris) appears with his belt ready in his hands, and he repeatedly whacks Kid with it for his disobedience.

In a mid-credits scene, Boyd and Warnarski are walking back to their car from the station when they look up and see a roof – literally blown sky-high off a house during a very noisy house party at the start of the movie – coming down from above, and it crushes them. 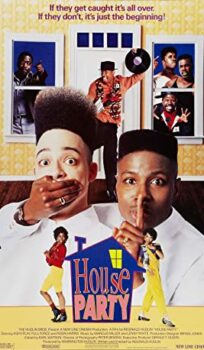