SHORT VERSION:
At the pajama party in the faculty dining hall, Rick and Sheila try to run a con on Zora like they did on Peter, and Miles takes Sidney upstairs intending to have his way with her. Chris tries to stop Miles, but Miles punches him, and then he tries to force Sidney to go where he wants to go. Chris gets Mr. Lee’s baseball bat from the kitchen and confronts Miles again, prompting Miles to ditch Sidney and start running with Chris chasing after him. Around the same time, Peter spots Rick and Sheila and yells that they stole Chris’ scholarship check, so they are forced to flee upstairs as well, and Stab, Pee Wee, and Zilla arrive to shut the party down and also get swept up in trying to catch the antagonists. After a long and wacky chase, Rick and Sheila are captured, and Chris manages to get the better of Miles and subdue him.

Dean Kramer then comes in with the police, and Peter tells the cops about what Rick, Sheila, and Miles have done. They are thus all arrested, and Kramer also expels Miles and commends Stab, Pee Wee, and Zilla for their work, and they later become official campus security guards. He then tells Chris, Peter, and their friends that they have one hour to tidy up the dining hall or else they will be expelled, too. Mr. Lee shows up during the process, and Chris hands him the box carrying the cash earned from the party that was supposed to go towards his tuition payment, saying that the money should cover the cost of the damages.

Now unable to pay his tuition, Chris decides to drop out of school, but Play prevents him from doing that in the end by selling off his prized car and giving him the money.

LONG VERSION:
In an effort to raise the money Chris (Christopher “Kid” Reid) needs to pay his tuition, Peter (Christopher “Play” Martin) comes up with a plan: They will throw another house party, but this time make it a pajama party, and they will hold it in the faculty dining hall. All the partygoers will pay an admission fee, and all the money will go to Chris, and Chris will just need to come up with the key to the place so they can set it all up. After he runs this by Chris in his dorm room, he responds by refusing to even consider it, and he leaves to go see Sidney (Tisha Campbell) at her dorm. He only finds her friend Zora (Queen Latifah) there, who eventually tells him that he might find Sidney at a rally taking place this afternoon protesting the cutbacks to the ethnic studies program. Chris finds Sidney there getting cozy with Miles (D. Christopher Judge), a student working for Dean Kramer (William Schallert) that has designs on her, and both she and Miles see him, after which he walks away. Meanwhile, Zora performs a rap number at the rally and is met afterwards by Rick (Louie Louie), the con artist who – along with Sheila (Iman) – scammed Peter out of Chris’ scholarship check, and he expresses an interest in signing her. Later, Miles gets to talking with Sidney and tells her that he is familiar with Chris and his financial difficulties, and he then lies by saying that Chris told him that he broke up with Sidney because she wouldn’t put out. Miles then tries to move in for a kiss, but Zora steps in and stops him.

While Chris is working his job at the dining hall’s kitchen, his boss Mr. Lee (Tony Burton) tells him that the office of Dean Kramer called saying that they want to see him right away. When he gets there, he finds out that Miles did not keep his promise to lose his paperwork so he could get more time to come up with the tuition payment, undoubtedly to spite him and get him removed from the college so he can continue to pursue Sidney without any problems from him. Dean Kramer then comes out of his office and soon tells Chris that, despite the fact that his deadline to pay has passed, he will give him one more week to come up with the cash, but warns that he will be definitively kicked out if he fails to come through. Chris then calls Peter and tells him that he is greenlighting the pajama party, and he later manages to steal the dining hall’s key without Mr. Lee knowing. As word about the party spreads around the campus, it reaches the ears of Chris and Peter’s old enemies Stab (Paul Anthony), Pee Wee (Bowlegged Lou), and Zilla (B-Fine), who are working as campus security guards. After they learn that it is illegal to hold any parties on campus without permission from the Dean of the school, they decide to find it and shut it down, which won’t be easy because they don’t know where it is. Meanwhile, Rick meets with Zora again and says that he and Sheila could get her signed in a heartbeat, and they agree to talk about a potential record deal at the pajama party.

As the shindig is in full swing, Sidney enters looking to speak to Chris, but she spots him from afar hugging his friend Patty (Alice Carter) out of joy due to the fact that the money from this will allow him to stay in school, and she assumes that they are dating each other. Just then, Miles comes up to her and starts putting the moves on her, and she starts dancing with him. Some time later, Zora has her meeting with Rick and Sheila. While Chris and Peter are performing a rap number, Chris is distracted by the sight of seeing Miles having Sidney drink and then coaxing her off the dance floor, and when he sees Miles taking her upstairs obviously to turn up the heat between them, he jumps off the stage and goes after them. Chris halts Miles, but Miles punches him and then forces Sidney up to the next floor. As this happens, Peter spots Rick and Sheila and yells that they stole Chris’ money, so he gets off the stage and chases after them. Chris gets Mr. Lee’s baseball bat from the kitchen and heads back after Miles, and after threatening him with it, he ditches Sidney, but Chris continues pursuing him. Stab, Pee Wee, and Zilla then show up and announce that this party is over, and though the partiers ignore them, they see Rick trying to flee upstairs to escape Peter and go after him, believing him to be a partier trying to run from their justice. Zora catches Sheila and knocks her out with one punch.

While Peter, Rick, Stab, Pee Wee, and Zilla have a wild and wacky chase throughout the top floors of the building, Chris eventually faces off with Miles alone on the roof, and they have a short fight that ends with Chris making Miles fall through a skylight and crash-land into the party cake, which leaves him knocked goofy. Dean Kramer and some policemen then arrive just after Stab, Pee Wee, and Zilla have captured Rick and Zora has brought Sheila to them. Peter and Chris then show up, and Peter fingers Rick and Sheila as the ones who robbed Chris of his tuition money, then says that Miles harmed Sidney and also shares blame for the loss of the money. Dean Kramer commends Stab, Pee Wee, and Zilla for their work and says they will be rewarded, then he expels Miles and has the cops take him away, along with Rick and Sheila. He lastly tells Chris, Peter, and their friends that they have an hour to put the building back to the way it was or else face expulsion themselves. As they are cleaning up, Mr. Lee appears, and though Peter tries to cover for Chris by disclosing the reasons for the party, Chris refuses to have him go through the whole story, wanting no excuses. Mr. Lee asks why he never came and talked to him about his money problem instead of doing this party, but Chris hands over the cash box and tells him that the money inside should cover the damages, and if it isn’t enough, then he will do whatever it takes for as long as it takes to make things right. He then leaves the hall.

The next morning, Peter comes up to Chris while he is visiting his father’s grave, but Chris is in no mood to talk to him, and we come to find out that he has decided to leave school because of his money issues. Sidney visits him in his dorm room to help him pack his stuff and says she will miss him, but Chris promises to come visit her, and they share a kiss. He then visits Mr. Lee and has a pleasant farewell with him, and then he goes to see Professor Sinclair (Georg Stanford Brown), where he finds that a paper he turned in to him has been given an A minus. Sinclair then asks Chris if he would be able to get by if he made him his student assistant, but Chris says that that job alone won’t cover all of his expenses. He tells Sinclair that he will get a job, save his money, and then come back to school, and Sinclair replies that many black people like them say that and then don’t return, so he had better make sure that he does. While Chris waits for Peter outside his dorm, Stab, Pee Wee, and Zilla drive past and show him that they got their stripes, and then Peter shows up with Bilal (Martin Lawrence) and two women in his old Pacer. When Chris asks where his prized car ForPlay is, Peter answers that it is his fault that he dropped out of school, and as he apologizes for that, he hands Chris a cash-filled envelope, having sold ForPlay to get him the money so he can stay in school. He then departs, but not before telling Chris that he will be checking in on him from time to time to make sure that he is doing good with his grades and such. Chris looks skyward and thanks his father for looking out for him. 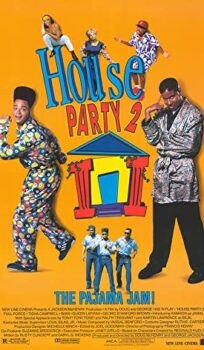