During a fateful summer in Washington Heights, Usnavi de la Vega (Anthony Ramos) and his friends chase their “sueñitos” (little dreams). He wants to retire to the Dominican Republic and run his father’s piragua stand by the beach. His friend Benny (Corey Hawkins)wants to win back the heart of his boss’s daughter, Nina Rosario (Leslie Grace), their studious childhood friend who dropped out of Stanford after a racist incident. Usnavi’s love interest, Vanessa Morales (Melissa Barrera), wants to leave Washington Heights and make fashion designs.

The neighborhood faces other issues such as gentrification, increasing rent, threats of deportation, and a blackout that lasts three days. After the power goes out, Abuelita Claudia, who has looked after nearly everyone in the neighborhood, passes away from the heat, and the whole neighborhood mourns and pays tribute to her.

Just as Usnavi is preparing to leave for DR after learning the piragua stand is available for purchase, he and Vanessa acknowledge their feelings for one another, as do Benny and Nina, who plan to continue a long-distance relationship since she is going back to school. After Vanessa teams up with Usnavi’s cousin Sonny, they convince him to stay home and continue running the bodega by also selling Vanessa’s designs.

Usnavi and Vanessa later become an official couple who have a daughter, Iris, and Usnavi and his friends continue to pursue their sueñitos. 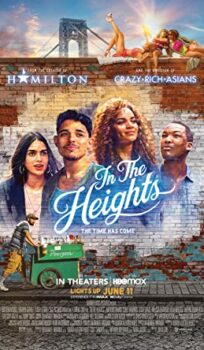