Uncle Boris (voice of Boris Karloff), tired of all the bickering and jealousy amongst the monsters, and wishing his nephew Felix (voice of Allen Swify) to have a normal life, uses his matter destruction formula to blow up himself, his island and the whole monster crew.

Felix and Francesca (voice of Gail Garnett) escape in a rowboat, and she confesses that she’s not human, but another of the Baron’s creations, and will one day “wear out” rather than grow old.

Felix pledges his love anyway (hmmm… sounds like the end of “Blade Runner!”)

Your editor has been reminded by “Booddika” that at the very end, Felix gets a twitch that could be interpreted as meaning that he is a machine as well. You know, I think Rankin & Bass should have a little word with Mr. Scott! 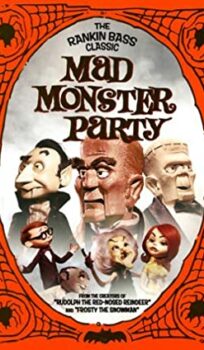