Pooper:
Traynor commits assisted suicide with his parents and Clark at his bedside. He leaves money to Clark so that she can travel the world.

Will Traynor (Sam Claflin) is a fabulously wealthy young man just embarking on a successful career. He also lives a daredevil lifestyle. One day, he is hit by a motorcycle while crossing the street and is left a quadriplegic. Traynor sinks into a deep depression as he moves in with his parents, Camilla (Janet McTeer) and Stephen (Charles Dance).

Lou Clark (Emilia Clarke) is a young woman who lives with her large family. They struggle to make ends meet, and things will only get more difficult with Clark’s sister moving out to go to college. When the cafe she works at goes out of business, Clark applies to a position listed by Camilla to be a companion for Traynor. She gets the job.

Traynor initially rebuffs Clark’s early attempts to become close to him or leave his home. The pair bond, however, after Clark supports Traynor when he learns his ex-girlfriend is going to be marrying his best friend. Traynor also begins to respect Clark after she calls him an asshole for his surly behavior. The pair continue to grow close watching movies and walking outside in Traynor’s palatial grounds. When Clark says she’s never left their hometown, Clark encourages her to expand her horizons and begin living life for herself.

Clark eavesdrops on a conversation between Traynor’s parents. She learns that Traynor made arrangements to go to Switzerland in six months to commit assisted suicide (which is legal there). Although both parents are heartbroken, Stephen respects Traynor’s wishes. Camilla hired Clark hoping, in part, that Clark could dissuade her son from taking this path. Knowing how much is on the line, Clark increases her efforts to get Traynor to embrace life again. She plans outings for Traynor with the help of Nathan (Stephen Peacocke), Traynor’s full-time private nurse and only other friend.

The pair attend a classical music concert and go to a horse racing track. Traynor even visits Clark’s home for her birthday and charms her family. Through this, they become incredibly close. In hopes of easing Clark’s burdens, Traynor arranges for Clark’s dad to get a stable job so that she won’t be responsible for supporting her family anymore. They even attend Traynor’s ex-girlfriend’s wedding together and have a wonderful time. After that, however, Traynor is hospitalized with pneumonia (his immune system is compromised by his condition). And Clark also realizes that Traynor remains undeterred about his plans to end his life.

Clark and her boyfriend break up, and she and Nathan decide to take Traynor on a vacation to a tropical island. Clark hopes that this trip will be enough to get Traynor to change his mind. On the trip, Traynor and Clark express their love for each other and kiss. Despite this, Traynor says he is going to end his life. He says that he can’t bear the daily pain of his condition (he wakes up every day already hoping for it to be over), and also does not want her to live a life bound by his limitations. Traynor then asks her to be with him in Switzerland when he ends his life. Feeling rejected and angry, Clark says she won’t accompany him and leaves the island heartbroken.

After Traynor and his parents fly to Switzerland, Clark reconsiders and flies after them. She arrives in time to share one last tender kiss with Traynor. He dies with his parents and Clark at his side. The film ends with Clark in Paris in accordance with Traynor’s last wishes. He left her a hefty inheritance so that she could experience life and travel the world.

There are also small roles in this film for Vanessa Kirby, Ben Lloyd-Hughes and Matthew Lewis. 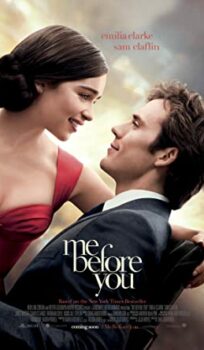