The film shows how the Minions came to work for Gru, and how he began his rise to becoming the world’s greatest supervillain.

As an 11-year-old, Gru idolizes the Vicious 6, the world’s most notorious villain team. When he tries to audition for them, they turn him down because he’s a kid. He steals from them the Zodiac Stone, an artifact that turns the users into animals on the Chinese New Year. A Minion named Otto loses the Stone after trading it with a kid for a pet rock, causing Gru to fire the Minions in anger. He gets captured by henchmen working for Wild Knuckles, the founding leader of the Vicious 6 that got kicked out of his own team because he’s too old. Minions Kevin, Stuart, and Bob are joined by Otto in their mission to rescue Gru.

Otto rides off chasing a biker who ended up with the Stone and befriends him on his road trip. Kevin, Stuart, and Bob go to San Francisco to find Gru and are taught kung fu by the retired Master Chow. Meanwhile, Gru bonds with Wild Knuckles, who has always been his favorite villain. Knuckles ends up taking a liking to the kid as well.

The final showdown takes place downtown in San Francisco during a Chinese New Year parade. Otto brings the Stone back to Gru, but they are found and captured by the Vicious 6. They take the Stone and morph into giant animal monsters, nearly killing Gru in the process. Knuckles and the three Minions fight the 6 and protect Gru, and Gru grabs the Stone to turn the villains into rats. They are taken into custody by the Anti-Villain League, as well as Knuckles.

Knuckles fakes his death and continues to work with Gru. Later, Gru rehires the Minions and goes to hire Dr. Nefario to be his personal mad scientist. 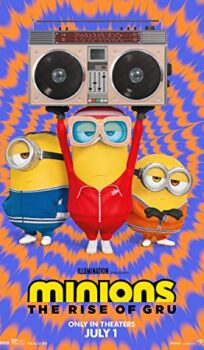