A team of soldiers led by Captain Natalie Artemis is transported to an alternate world through a rift. This world is inhabited by monsters, including large dangerous ones like the Diablos, which dwells in the sand and emerges whenever someone disturbs its home. Artemis’s whole team is killed by the Diablos, and spider monsters called Nerscylla. She is found by a lone Hunter, and while they fight at first, they agree to work together to fight the monsters and get Artemis home.

Artemis and the Hunter use Nerscylla venom to weaken the Diablos before they kill it by driving a sword into its skull. They venture further to the tower that creates the portal between worlds, and they are found by the Hunter’s old crew, led by the Admiral, after a larger fire-breathing monster, the Rathalos, attacks. Artemis teams up with the crew to fight the Rathalos so that she can get home.

Artemis makes it through the portal to go home, but the Rathalos follows and kills the soldiers that find her. Artemis hits the Rathalos at its weak spot to ignite an explosion that severely damages but does not kill it. The Hunter finishes the job with explosive arrows. The Admiral then warns that more monsters will keep coming through, so Artemis decides to continue fighting with them in the other world. 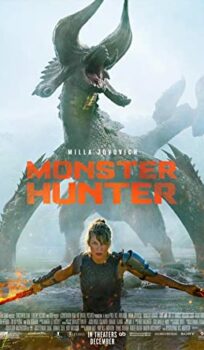