Pooper:
Blaire and Benny kill Victor and Zoe and save Jay. Benny is mortally wounded, so Zoe turns him into a vampire to save his life, and the pair start dating.

Long ending:
In Los Angeles, a pact exists between vampires and humans. The vampires get to live wealthy lifestyles hidden amongst humans so long as they only drink blood from willing providers and don’t operate in the Boyle Heights neighborhood (the humans who lived there brokered the truce). Jay (Raúl Castillo) is currently the leader of the Boyle Heights group that enforces the truce. One night, Jay’s girlfriend is abducted by a vampire named Victor (Alfie Allen), breaking the truce. As Jay gathers his forces to attack Victor, he lets his younger brother Benny (Jorge Lendeborg, Jr.) (who knows nothing about vampires) cover his shift as a hired driver.

Benny picks up two women named Zoe (Lucy Fry) and Blaire (Debby Ryan). They taunt him as they drive, although Zoe seems to generally like Benny. At one stop, Benny walks into the hotel he dropped them off at and finds them drinking the blood of people there. Using their superhuman powers, the vampires beat Benny up and force him to continue driving. Benny soon learns that the women work for Victor (Zoe is his girlfriend). Victor has a plan to take over the LA vampire council by killing the five ruling members. Benny is driving the women to the council members’ headquarters to take them out. Victor also plans to kill Jay and his crew. Meanwhile, Victor personally kills two council members (cameos by Syndey Sweeney and Megan Fox).

As the night continues, Blaire and Benny grow closer. Eventually, when a group of vampire hunters (unrelated to Jay’s group) attack, Benny saves the womens’ lives and brings them to his house to lie low. There, Blaire is impressed by Benny’s musical talent. He later willingly drives them to the home of the last remaining vampire leader. Blaire and Benny make out while Zoe goes inside to kill him. Meanwhile, Victor captures Jay and his crew (after revealing he killed and ate Jay’s girlfriend).

The mission complete, and Benny drives the women to Victor’s home. Blaire confides to Benny that Victor has captured Jay, but urges him to simply drive away so that Victor won’t come after Benny too. Benny instead sneaks into the home and frees Jay from a machine that is draining his blood. He is caught by Victor, who taunts the brothers and prepares to kill them both. Benny remotely turns on his car (which he earlier positioned in front of Victor’s windows with a rock on the gas pedal), and it drives through the window, flooding the room with a streak of sunlight. The sunlight immediately destroys Zoe as Blair attacks Victor. Eventually Blaire, Benny and Jay manage to push Victor into the sunlight and kill him. Benny is gravely wounded in the skirmish, so Blaire turns him into a vampire to save his life.

The movie ends with a new truce in place and Jay and his crew freed. Benny and Blaire are dating. Benny assures his brother that while he’s now a vampire, he’ll fight on the side of the humans if needed. 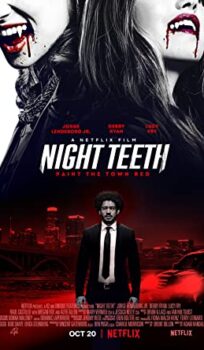