The assassination of Martin Luther King (Gilbert Glenn Brown) marks a turning point in the relationship between Aretha “Ree” (Jennifer Hudson) and her father C.L. (Forest Whitaker); he drunkenly reminisces of all of King’s efforts to get as far as he did with the Movement for Civil Rights, but dissents with Ree on how she feels black people need to fight further for a better future vs. how he believes engaging in such path would be a lost cause. Also, she tells him off when he tries to coax her into touring with him once more but, then, chastises her for her libertine lifestyle -as “no longer walking in the spirit”- when she sternly declares she will stay on her own path.

Ree’s life and career follow their turbulent course. She finds herself at odds with all her siblings and her tour manager/boyfriend Ken (Albert Jones) when they confront her about her over-working and substance abuse and she angrily reminds them about being everyone’s meal ticket. Ken ends up leaving when she won’t listen to reason and becomes too much to handle. During a certain concert, when she tries to sing “Say A Little Prayer For You” while visibly intoxicated -so much that the backup choristes were the ones doing most of the singing-, she falls off the stage, to everyone’s shock.

One night, lost and in despair, after a heavy drunken binge, she reaches her breaking point and, seeing a vision of her deceased mother, Barbara (Audra McDonald) -who comes by her and comforts her-, she falls to her knees and starts tearfully praying, coming to realize the need to change her ways before it is too late. She then approaches her producer Wexler (Marc Maron) with the idea of recording a gospel album, which she also wants to co-produce. He, at first, does not acquiesce, since he doesn’t see the prospect of gospel music as commercially successful, until they both come to the agreement that, parallelly, a documentary of the album’s making must be shot, to make it appealing to a public as large and open as possible.

The recording session takes place at a Missionary Baptist Church in Detroit, under the guidance of Ree’s good family friend and established artist James Cleveland (Titus Burgess). When she feels out of power to do a successful job, James reassures her the spirit moves everyone in different ways and she will be able to prevail as she always has. With the support of a large audience that includes her father -who also makes amends with her for the errors of his ways in the past-, grandmother, siblings, Ken -who came back to her- and others, she goes on the stage and starts singing “Amazing Grace”.

The movie ends, showing title cards that inform of the massive success of the Amazing Grace album -her career-best-, as well as other many honors and achievements Ree continued attaining for the remainder of her career and her life, including singing “My Country ‘Tis Of Thee” at Obama’s inauguration in 2009, and a posthumous Pulitzer Prize Special Citation, a year after her passing, in 2019. The final visuals are shots of the real Aretha Franklin, herself in one of her final live performances doing “You Make Me Feel Like A Natural Woman” and a dedication of the film in loving memory of her. 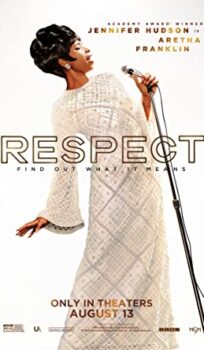