One night, a drunken Ricky (Bentley Mitchum) visits Ruby (Ashley Judd) at her home, and after telling her that he has been unable to get over her (despite her having been just another one of his sexual conquests), he attempts to sexually assault her. Thankfully, his attempt is quickly brought to an end when they hear a car parking outside and Ruby threatens to scream. He decides to take his leave, but before he does, he fires Ruby from his mother Mildred’s (Dorothy Lyman) souvenir shop. She hides the truth behind her termination from her boyfriend Mike (Todd Field) and spends weeks looking for a new job until she lands one in an industrial laundry factory, though it doesn’t pay as well. Sometime later, she confesses to her friend Rochelle (Allison Dean) that Ricky fired her from the souvenir shop because of the problems they had.

Mildred comes by Ruby’s place one evening, and she says that Ricky had led her to believe that she had abruptly packed up and moved back to Tennessee, but Rochelle came to her recently and gave her the real story. She explains that Ricky takes a lot after his long-forgotten ass of a father, but she still has some hope for him. She then informs Ruby that she actually didn’t need anyone when she first hired her; she took her on because she reminded her of something, for she possessed a “fury” that she recognized from a long time ago. She asks Ruby to come back to work for her, promising to make her the assistant manager as well as assuring her that Ricky will trouble her no longer, and Ruby agrees to return.

Later, Ruby reconnects with Mike after having largely ceased communications with him during her rough period. While they are out and about one night, he voices his discontent over her having returned to a sales job since he believes it to be a waste of life, and she retorts that he really needs to ditch his “gloom and doom” outlook on life. He agrees with her, and they hug. However, Ruby narrates that they saw each other less and less after that night, and while she accepts that whatever romantic feelings they had for one another are gone, she hopes that they will still keep in touch. As Ruby is working one day, Ricky approaches her, and he tells her that he is getting counseling for his issues and apologizes for all of the wrongs he has done by her.

In the closing moments of the film, Ruby – through writing in her journal – narrates that she supposes that it means more to make it in some big city somewhere, but this place was the world she found. She guesses that the questions stay the same, though, like: Where does caring come from? Can we ever know our true desires? Why are all of us so often lonely and afraid? She believes the answers are probably very simple and close, smiling somewhere, lying quietly, waiting for us. After writing, she goes in for another shift at work and finds the place as quiet as a graveyard, due to the fact that the off-season has come again. 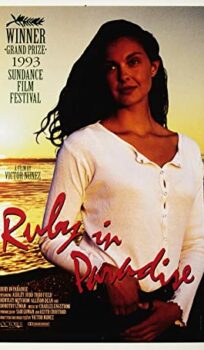