One day, Jack (John Candy) gets a call from someone who tells him that the landlord of the rental house has just gotten out of the hospital, but he must meet with him at the local funeral home. Jack heads over there hoping to straighten out the rent situation on the house for the remaining two weeks, but he discovers that his landlord has actually died and his funeral is taking place right now. What’s worse, he finds out that Al Pellet (Richard Crenna) – the pompous champion yachtsman whom he has already become enemies with – is the new landlord. He gives Al a $1,000 check to cover the next two weeks’ worth of rent, but Al tears it up and orders him and his family to vacate the rental house by midnight on Saturday, when their current two-week stay ends, or else he will toss them all out himself.

The next day, we see Jack hanging out with Scully (Rip Torn) at the latter’s restaurant/sailboat, the Barnacle, and watching Al do some practice sailing in his yacht, the Incisor, with his crew for the annual Citrus Cove Regatta. After thinking about how the regatta is happening soon, Jack checks over the Barnacle and begins to think that it might be worthy of racing, and he runs this idea by Scully and gets his approval. He later finds and confronts Al and tells him that, because he took a vacation away from his family, he is going to take the regatta trophy away from him. Al scornfully replies that he has no hope of outsailing him (a statement supported by the fact that he has won the regatta for the last seven years), so Jack asks if he would like to bet him on that. He then lays down the bet: If Al wins, he will pay Al the $1,000 for the last two weeks’ rent and he and his family will go home, but if he wins, Al will have to let him and his family stay in the rental house for free for those remaining two weeks. Al arrogantly accepts.

Jack tells his family about the bet he made, and when Sandy (Karen Austin) points out that he doesn’t have a boat to race with, he informs her that Scully and his employees Cortez (Santos Morales), Yorku (Harry Yorku), and Angus (Richard Herd) are going to help him transform the Barnacle into a race-worthy vessel. The overhaul of the boat goes slowly at first, but after Jack has a chat with his eldest child Jennifer (Kerri Green) about it and how he would like to get a victory for once, she and the rest of the family decide to help him out. They all quickly get the boat into tiptop shape, and the family derives some real enjoyment out of doing it, too.

As the regatta gets underway, the Barnacle is in last place, and remains so despite Jack receiving coaching from Scully. However, when Scully finds out that Cortez mistakenly kept the freezer full of food on board, the crew tosses it overboard, and the Barnacle’s speed increases as it enters the final leg of the race. Then, it gets an extra burst of speed when Jack catches a wind gust in the sail created by a low-flying small plane, and it starts to close in on the Incisor. Jack asks Scully how they can get more speed, and he replies that they need more sail for that, and Angus remarks that another two yards of it could get them past the Incisor. Jack therefore decides to remove his pants and string them up on the line, and this helps put the Barnacle ahead of the Incisor and across the finish line, winning the regatta for Jack and company. 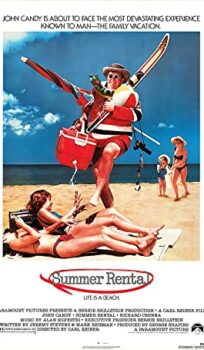