A satellite crash lands in the small desert town of Piedmont, New Mexico, and within a few minutes, the entire population of the town dies. Believing an alien organism has been brought to Earth, the US government activates Project Wildfire. Wildfire is an underground facility in Nevada that is designed to investigate harmful organisms that originated from outer space. Several scientists are summoned to Wildfire to investigate the satellite. Two of them, Drs. Stone (Arthur Hill) and Hall (James Olson) travel to Piedmont to collect the satellite, where they determine the townspeople died because their blood crystallized. They also find two survivors: an elderly man and a newborn baby. Meanwhile, the military has requested that the President authorize a nuclear strike on Piedmont to prevent the spread of the organism, but he is hesitant to do so.

The scientists arrive at Wildfire and go through several layers of intense decontamination. Dr. Hall is then given the only key that can deactivate the building’s self-destruct system, which is in the form of an onsite nuclear bomb, which is designed to go off if an organism escapes containment. The scientists begin their examination, and they discover a tiny piece of a meteorite impacted the satellite, causing it to fall out of orbit, and there is an organism on that rock. The organism is crystalline in nature and is constantly growing and mutating. Meanwhile, Dr. Hall learns from Mr. Jackson (George Mitchell), the elderly survivor, that he has been drinking Sterno to treat his ulcer, and that the baby, who is constantly crying, is named Manuel. Dr. Hall determines that drinking Sterno has made Jackson’s blood overly acidic, and Manuel’s constant crying is keeping him from fully inhaling oxygen, making his blood overly alkaline.

With this knowledge, the scientists determine that the organism, now code-named The Andromeda Strain, can only survive within a narrow range of blood pH. People with blood that is overly acidic or overly alkaline are immune. They also determine that a large amount of energy, such as what is provided by a nuclear bomb, would strengthen Andromeda and turn it into a super colony and all life on Earth would be wiped out. They notify the military to tell the President not to nuke Piedmont, so that will prevent a super colony from forming over New Mexico. Fortunately, the piece of Andromeda they have has now mutated into a non-lethal organism. However, that mutation has caused it to now be able to degrade synthetic rubber and plastic. As a result, Wildfire’s protective seals are destroyed and The Andromeda Strain has escaped containment. Wildfire goes into lockdown, which also activates the self-destruct system and the onsite nuke. If it goes off, then the super colony that will wipe out the planet will form over Nevada.

Dr. Hall goes to deactivate the nuke, but since Wildfire was still under construction when it was activated, the failsafe device on their level wasn’t installed yet. The only way to get to one is to get to another level, but the building’s laser defense systems are designed to prevent anyone or anything from accessing other levels during a lockdown. With Dr. Stone assisting, Dr. Hall dodges all but a couple of the lasers shooting at him, giving him small but painful burns on his body, and he makes it to another level and reaches the failsafe just seconds before the nuke goes off. Days later, the organism over Piedmont has blown over the ocean, and rains will force it into the water, where its alkaline nature will destroy it. 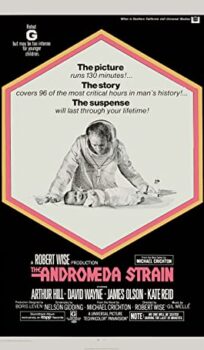