Short pooper:
With the help of his cousin Mary (Kate Maberly), and Dickon (Andrew Knott) -young maid Martha’s (Laura Crossley) kid brother-, Colin (Heydon Prowse) is nursed to life and full health; he learns to walk and spends a lot of time in his deceased mother’s garden, revived throughout the movie by Mary and Dickon. His father, Lord Craven (John Lynch), awakens from his emotional slumber and surprisingly returns to Misselthwaite Manor, where he joyfully reunites with his now healthy son.

Longer version:
Mary convinces Colin that he might not be as sick as everyone thinks and claims, and to give a chance to abandoning his lifelong seclusion and spending time outside in the garden which used to belong to his deceased mother Lilias (Irène Jacob) and, under the dedicated care of herself and Dickon, has blossomed into a beautiful place full of vibrant plants and adorable little animals. He agrees and, despite the fervent opposition of Mrs. Medlock (Dame Maggie Smith), the manor’s austere and dry Head Housekeeper -and who has devoted herself to tend to Colin for most of his life-, he starts visiting the garden daily; as a result, he comes to be able to walk, run and play and also turns into a happier and more confident and well-behaved young boy. This also marvels Ben (Walter Sparrow), the old gardener, who had agreed in helping Mary and Dickon with the garden and keeping it a secret from everyone else.

Medlock takes steps to force Colin back to her old reclusive care methods and to keep Mary separated from him, but to no avail. Eventually, Colin longs for his father to return and see how much things have changed for the best. One night, with the assistance from Ben, the three youths perform a magic ceremony intended to lure Lord Craven back. It seemingly works; he wakes from a dream where Lilias is calling him “from the garden, with Colin” and decides to head back immediately.

Upon his return, he is stunned at how everything looks open and full of light; Medlock tries to justify herself and blame it on the presence of Mary, but he rebuffs her, especially when young Martha timidly announces that Colin was, most likely, in the garden. Feeling dejected and fearing she will be deemed useless, Medlock announces her intention of resigning and has a brief meltdown, but Martha manages to comfort her.

While playing hide-and-seek, Colin comes across his father, who has arrived in the garden and is marveled at the sight of all the surrounding beauty and his son being a fully functioning person. This causes Mary to feel neglected and unwanted, believing she might be sent away and, for the first time, she cries and runs off. Dickon tries to console her -it is to be noted there were subtle hints of possible romantic feelings between the two of them-; but then, when Colin and Lord Craven find her, he commends her on all the wonderful things she achieved around the place and reassures her that she is loved as family and that the garden will never be shut down again. Dickon is seen riding his horse, off to the meadows, and Colin gleefully walks back towards the manor with his cousin and father, while all the staff observes in awe, including a Medlock happily moved to tears.

As the film ends, Mary comments, in voiceover, how the spell was broken, her uncle was able to laugh as she was able to cry, the garden would remain open and full of life, and, as a reflection, “if we look the right way, we can see that the whole world is a garden”. 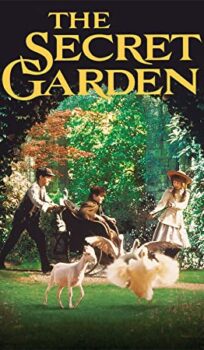