Weird Al (Daniel Radcliffe) achieves great success as a parodist. Still seeking approval from his disapproving father, he decides to only write original music. He succeeds brilliantly with his original song ‘Eat It’ but becomes distraught when Michael Jackson’s parody, ‘Beat It,’ proves more popular. Wanting him to boost her career by writing a parody of her song, Madonna (Evan Rachel Wood) seduces Al. She encourages him as he drives away his band and mentor, Dr. Demento (Rainn Wilson), with his drunkenness and arrogance. He writes ‘Like a Surgeon’ for her after almost dying while drunk.

Madonna is kidnapped by Al’s superfan Pablo Escobar (Arturo Castro). Al heroically rescues her, killing Escobar and his crew in the process. Madonna tells Al they should take over Escobar’s drug cartel together. Realizing Madonna was only using him in her quest for power, Al leaves her.

Weird Al stops drinking and reconciles with his parents, his band, and Dr. Demento. His father (Toby Huss) tells Al why he tried to stop Al from playing the accordion and being weird: he was the same himself as a youth. It got him banned from his Amish community, and he wanted to spare Al that pain. Weird Al returns to parody with a song his father wrote, ‘Amish Paradise.’

On stage accepting his Grammy award for accordion music, Weird Al is assassinated by Madonna’s henchman.

Years later, Madonna visits Al’s grave and leaves a single red rose. His decomposing hand reaches out from the ground and grabs hers. 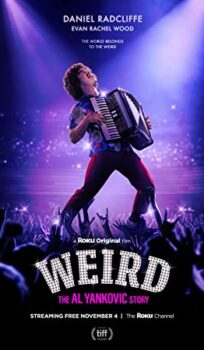