During the campers’ second night in the ghost town, a mysterious man dressed in black cowboy attire comes into town at the stroke of midnight with a dog and two horses, one of which is carrying him and the other is carrying something with a cloth draped over it. The campers come out of the saloon to see him, and one of the guides, Rudy (Joseph Alvarado), checks under the cloth and finds Jerry’s (John Nowak) body under it. Another camper tells Rudy to ask the man about Stan (Ethan Wayne), one of the other guides who went with Jerry during the daytime to find help at a ranch 30 miles away. The man – whose name is revealed in the credits to be Charlie Winters (Woody Strode) – brings everyone back into the saloon, and while he never gives any information on Stan, he tells the group that he had been a sailor for 40 years who served under a fearless captain, and they came to this town when “company men” who ran the ships wouldn’t give the captain another ship to sail. Charlie then pulls out a pocket compass, and after he tells them that the captain had given this to him, the needle soon starts to spin, putting him on alert and indicating that the unseen killer is there with them (and also hinting that the killer is the ghost of the captain himself). Charlie then leaves without explanation.

Rudy and a few of the others then spot a floating light inside one of the stores, so Rudy leads the group in there to investigate it. They don’t find anything, but they decide to barricade themselves inside to keep safe from the killer. Sometime later, a wounded and disoriented Stan shows up, but when Andy (Bob Macgonigal) heads back into the saloon to get the first aid kit, the unseen killer attacks and murders him. The killer then comes up to Bob (Pepper Martin) when he steps outside the store and murders him as well. Having witnessed this, Lou (Joe Allaine) closes the door, and he and the others try to keep it shut as the killer attempts to beat it down. The killer manages to get the door open wide enough to grab hold of Lou and pull him out, but before Lou can be killed with a scythe, two gunshots are fired at the killer (who is shown to be an invisible force). The scythe drops to the ground, and then Charlie emerges from the shadows, having been the one who fired the shots. He then disappears when the ranch owner that Jerry and Stan managed to reach arrives in his truck with his wife to help the survivors. The camera then pans down onto Lou’s unconscious body, and we see Charlie’s compass lying next to him.

The film then closes on the setting of its opening scene, which first shows a portrait of an old galleon, then the figurines of the butcher, baker, and candlestick maker on a shelf, but this time the butcher has been decapitated along with the other two. We then see the clock on the shelf tolling the midnight hour once again, and then finally we see a portrait of the sea captain himself, dated 1891. This (evidently) means that the captain was indeed a ghost who drove off everyone in the town and sought to murder anyone who stepped into it, and Charlie was also a ghost who had spent years trying to stop him and had apparently finally succeeded. 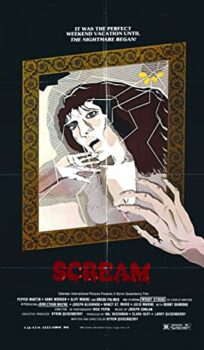